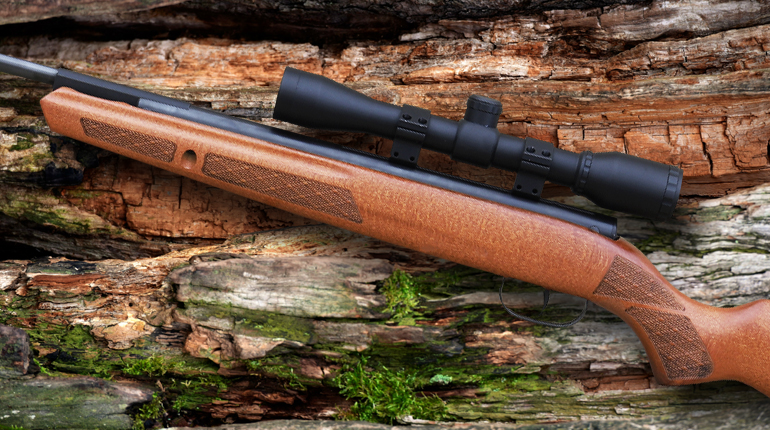 Welcome to Mark’s Top Picks! In this blog, we will be looking at the Winchester Model 45 and 45-RS Air Rifles. These outstanding air rifles are very popular due to the solid build and low price for either model. There are a few differences between the 45 and the 45-RS and both have made it into my top picks. Let’s start with the more affordable Model 45 air rifle…

This is going to appeal to a lot of shooters, as it’s such a familiar layout but has some really great features. The relatively slim compression cylinder is around 12-inches long and is well-polished and blued. It’s really nice to see that the steel cylinder has been prepared so well before the finishing treatment occurs, as some manufacturers do not do a good job at this stage. The 17-inch barrel has also been well finished and it has a ½-inch UNF thread at the muzzle, complete with screw-on protector, for you to add a moderator to make the rifle longer. The barrel, as you would expect, is rifled and the bore looked crisp and shiny. The barrel is retained by the traditionally sprung detent. If you flip the 45 rifle over, you will see the articulated cocking lever that joins the barrel to the piston, it means that the cut-out in the underside of the stock is kept relatively short.

The sighting options are good. The foresight consists of a polymer ramp with blade on top, with a red fibre optic rod housed within it. This simple feature looks like it is illuminated but in reality, it’s just the ambient light being concentrated at the end. There is a fully adjustable rear sight, complete with yellow inserts, mounted above the breech and the elevation can be altered via thumbwheel and windage by a small knob on the right side. Should you run out of elevation, the plate that carries the U-notch can be raised further by first loosening two small screws on the rear of the unit and then tightening them again when the notch has been raised. If you wish to use optical sights, such as a scope or red dot, it’s simply a matter of attaching one to the rails machined into the top of the cylinder, there’s plenty of room to get the eye-relief correct too as the grooves are 7½-inches long, complete with a hole for a scope mount stud to prevent scope creep.

The trigger unit is two-stage and adjustable if required. An anti bear trap mechanism is fitted, which prevents the rifle from firing during cocking and a manual, re-settable safety catch is mounted on the right of the cylinder, back for SAFE, forward for FIRE.

Next up, let’s look at the 45-RS – ‘R’ for rail and ‘S’ for silencer. The RS shares the same action as the standard 45 but with the added extras above. On top, there is a fitted rail, which raises the sightline and no open sights are fitted! The silencer is fitted to the shortened, 12¾-inch barrel, the silencer is removable as it is fixed via a ½-inch UNF thread. The rifle is obviously much shorter with the silencer removed but produces a bit of a crack without it. I recommend that you use it at all times!

The woodwork fitted is similar to the 45’s but the forend tapers more and not rounded tip and there are stylish flutes running along the top, almost back as far as the scope rail. The chequered panels differ from the 45 but once again, it’s great and great to handle.

WINCHESTER 45 AIR RIFLES AT THE RANGE

First, I fitted the 4×40 Pro Scope and 11mm Standard Mounts to the rail of the 45-RS. I did not fit a scope to the 45 Classic as I wanted to see how good the open sight worked. Both rifles were .177 (.22 rifles are available but I like .177 for target shooting) I was using RWS Superdome pellets.

I set up some paper targets in nice convenient spots and set about zeroing both rifles. I set up the 45 with a 15-yards zero and the 45-RS with a 25-yard zero. Both rifles were a bit ‘twangy’ to begin with, they were straight out of the box but – however, after a few shots, they both started to perform very well. I found that I got the best accuracy if I didn’t hang about too much and simply ‘pulled’ when on target. Power was around 11 ft.lbs, so more than adequate for targets or vermin. The fit and finish are good and the accuracy very good and it is clear both rifles like the RWS pellets. The RS model is more expensive than the standard 45 but is well worth the extra and is slightly lighter and has some outstanding features. These air rifles may not have an underlever like their name-sakes but they’re definitely worthy of the Winchester name!

Accuracy was very good with both rifles and the firing cycle smooth and crisp. Once I started shooting I could not stop, I really enjoyed shooting these Winchesters and that is why they are in my top picks.

TAKE A LOOK AT THE WINCHESTER AIR RIFLES HERE.

This blog is from MARK JBBG and is part of the Mark’s Top Picks at Just Air Guns UK.